A restaurant which draws inspiration from the eclectic food culture and bold flavours of Australasia is set to launch in Cardiff, the first of its kind in Wales.

Cardiff’s five-star St David’s Hotel, respected as an innovative leader in the hotel industry, is launching a brand new restaurant concept on 15th September, with its name – The Admiral St David – derived from the hotel’s nautical roots.

The contemporary new restaurant and bar, which boasts unimpeded views of Cardiff Bay, will be introducing dishes influenced by countries within the Australasian and Asia-Pacific region including Australia, Indonesia, Thailand, Japan and Sri Lanka.

General manager Russell Durnell called on food lovers to visit the “fresh and unique dining experience which is unlike anything else in Wales and the south west of England.”

He said: “We are bringing the zest, spice and flavours of new Australasian dining to the heart of Cardiff Bay and taking our guests on a culinary journey.

“Diners at The Admiral St David will experience a melting pot of flavours and cultures in a mouthful. We have taken the very best dishes from Asia-Pacific and Australasia and added the best Welsh produce to offer something exciting and different.

“We look forward to seeing our guests enjoy the “deliciousness” of our new restaurant concept which we are certain will fast become a firm favourite in the Cardiff dining scene.”

The Australasian-inspired food menu, is complemented by an extensive drinks menu with wine, spirits, beer and cocktail with a distinctly New World theme. As well as several rum based cocktails including Pearjito and honeysuckle daiquiri, it has used its local roots to put a twist on several classic cocktails with the Tiger Bay Punch, James’s Giant Peach Bellini, George’s Marvellous Medicine and the Welsh 75.

Mr Durnell continued: “Our bright, relaxed retreat overlooking Cardiff Bay is the ideal spot for couples and friends going out for drinks. Alongside some of Wales’ very best drinks producers such as Penderyn, we’ve got a big selection of world whiskies and wines allowing our guests to sample delights from around the globe. We’ve also had some real fun with our cocktail menu putting a twist on several classics with some surprising fresh flavours. I think our Kiwi and Lychee Cosmo and Honeysuckle Daiquiri will be big hits!”

The new restaurant and bar has been launched in the former Tempus at Tides eatery located in the five-star hotel, operated by The Principal Hotel Company.

Its overhaul comes as the national group, which manages hotels in London, Edinburgh, and Manchester, aims to expand its reach this year with new ventures including the St David’s Hotel, and Blythswood Square and The Grand Central Hotel in Glasgow. 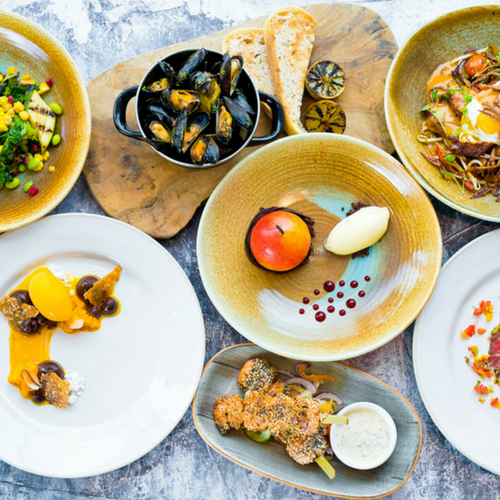