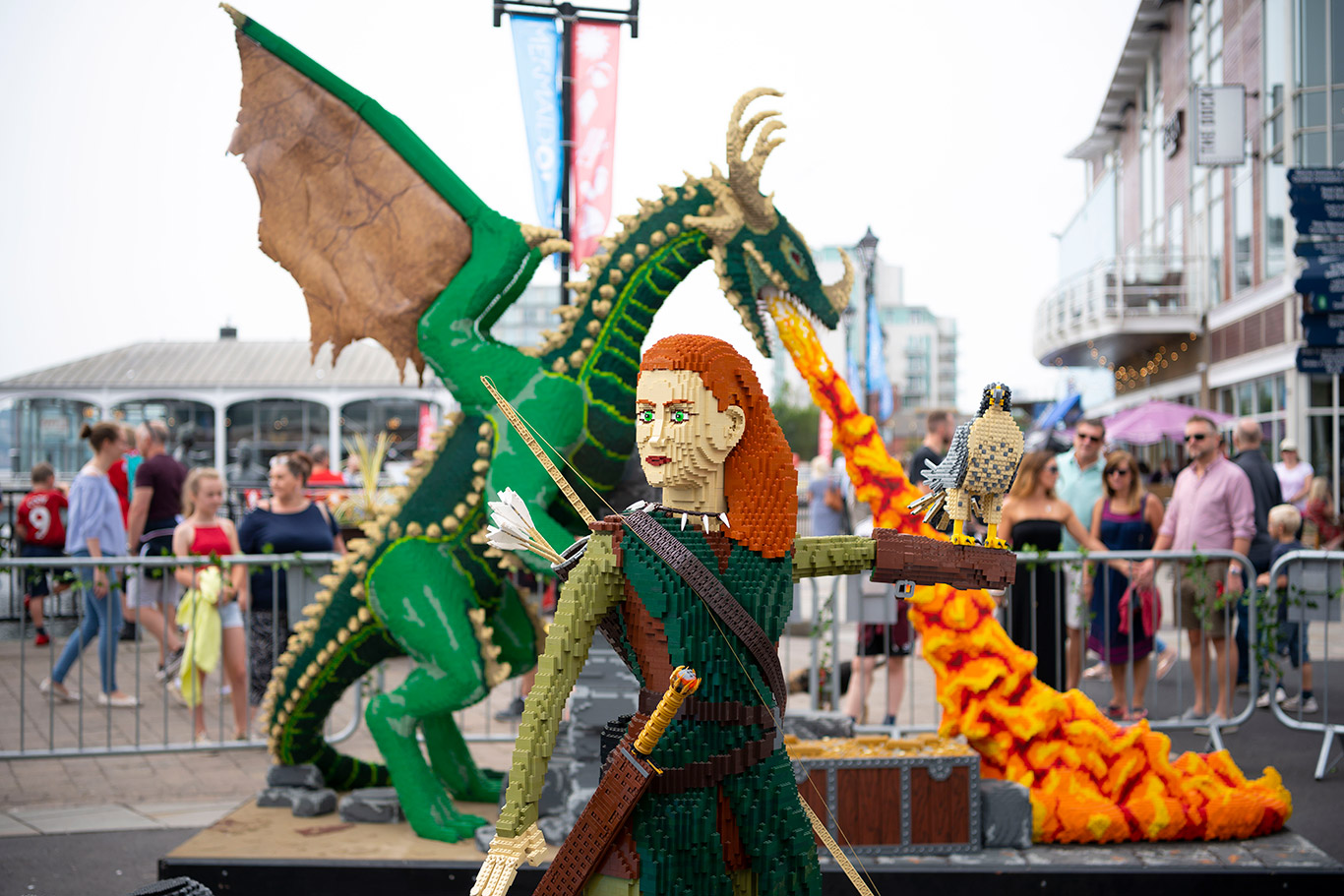 Cardiff Bay is home to mythical creatures and more now that the BRICKLIVE Fantasy Kingdom has landed at Mermaid Quay.

Nine fabulous models made with a total of nearly 750,000 LEGO® bricks have taken over Tacoma Square, in the heart of Mermaid Quay, until Sunday 1st September.

Free to view, the display features an 11ft fire-breathing dragon, a unicorn and two hunting wolves as well as a wizard, princess, knight and huntswoman. Collectively the models took over 2,000 hours to build. There are also cute dragon whelps (baby dragons) displayed in the windows of various businesses in Mermaid Quay.

At the heart of the display is a throne – laid out in shimmering silk and encrusted with the finest LEGO® brick rubies, emeralds and sapphires – on which visitors can sit and take selfies. Mermaid Quay is running a weekly photo competition to crown a Selfie King or Queen each week – with FREE ice cream for a year from Cadwaladers Mermaid Quay as the weekly prize.

In addition, Mermaid Quay is running a host of other competitions, including:

This is the first time BRICKLIVE’s Fantasy Kingdom have been be on display in Wales and follows the success of previous displays at Mermaid Quay including the Great Brick Safari, Santa’s Sleigh and Big Cats, which all attracted many thousands of visitors.

The display is visible any time, but the throne will only be available to sit on 10am – 6pm daily. Visiting the installation is free of charge. 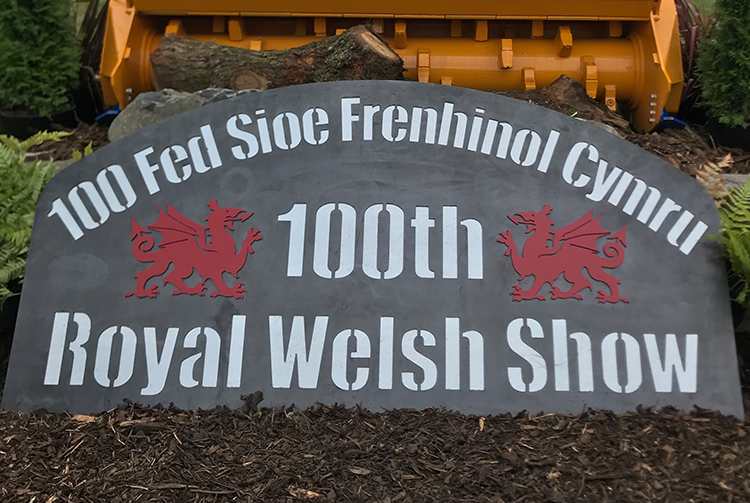 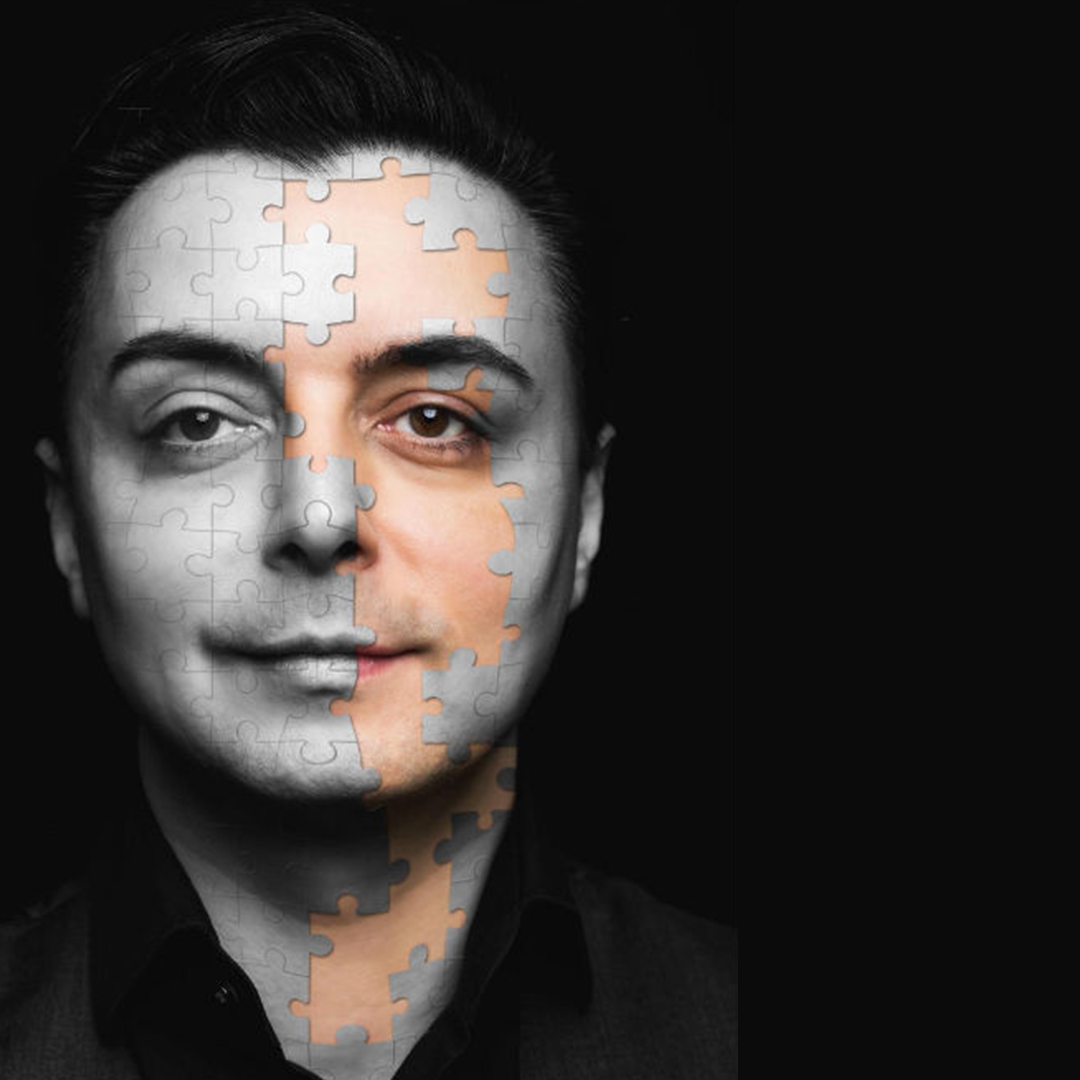 Mysterious Britain’s Got Talent finalist ‘X’ was revealed to be none other than last year’s semi-finalist – magician Marc Spellman.

Spellman, a mind-reader and magician, impressed Britain’s Got Talent judges in 2018 with his emotional performances, which earned him the elusive Golden Buzzer, but this year went on to the final to scoop the runner-up prize.

ITV viewers and the judges were left in shock on Sunday night as the performer revealed his identity at the grand final missing out on the main prize by a nose to Chelsea Pensioner Colin Thackery.

At the end of his performance, ‘X’ played a video which revealed who he really was, adding: “It was always about hope and never giving up, it has been an honour sharing X with you. I am X.”

This revelation also came as a shock to hundreds of school children and young people across South Wales, involved in the Beyond Words-Hitting the Right Note concert, of which Marc is a patron.

A thousand children from 36 schools across South Wales have volunteered to sing in a musical extravaganza at the Motorpoint Arena Cardiff, supported by a host of celebrity acts and professional musicians.

The Beyond Words concert, now in its sixth year, will take place on 15th July 2019 at the Motorpoint Arena and will feature local school children and young people aged between 8 and 23, with a team of young people aged 16 to 23 organising the event.

The theme of the concert will be based on the smash hit song A Million Dreams from the hugely popular musical The Greatest Showman but adapted to create a story about charity and young people’s dreams.

The concert is set to be a showcase of different talents with the children learning new skills as a result of performing alongside world-renowned artists.

Paul Zerdin, a British comedian, ventriloquist and winner of America’s Got Talent in 2015, along with his ‘dysfunctional’ puppet family including popular ‘teenager’ Sam, will also be performing alongside ‘Mystery artist’ Marc at the concert.

Paul says of his role in the project, “It’s terrific being involved with a project that can really reach out and have such a positive effect on young people. Also being a ventriloquist, I have more than one voice which does help make up the thousand voices!” 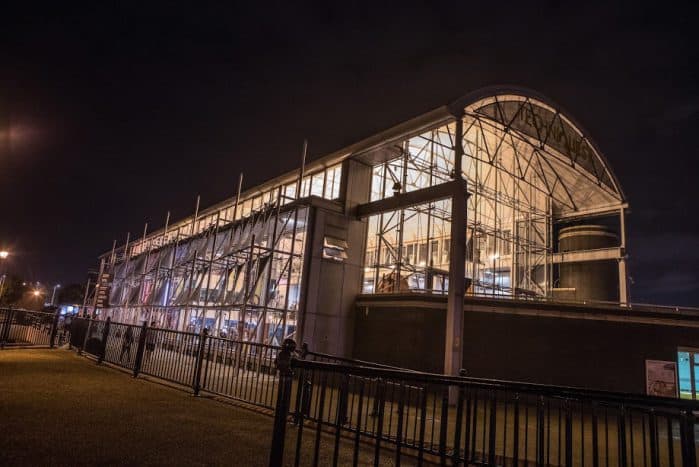 Techniquest’s exciting After Hours events are making an “unforgettable” return to Cardiff with time travelling fun and a live escape room set to thrill visitors.

The popular over 18s events, which allow visitors to explore the science centre at night, are making a comeback in October with an exciting line-up of evenings already announced.

On October 17, After Hours will return by delving into the futuristic world of science and technology with its highly anticipated After Hours: Into the Future night.

The evening will immerse visitors in emerging technologies and cutting-edge virtual reality and augmented reality experiences, allowing them to get a realistic glimpse into the future.

Then in December, Techniquest will be transformed into an escape room unlike any other. On December 5, Techniquest will join forces with Breakout Cardiff for the intriguing After Hours: Codebreaker event, which will challenge visitors to crack codes, unravel mysteries, and collect clues as part of the exciting evening.

In the new year, the science centre is taking a dip in the deep with its After Hours: Under the Sea evening on February 7. Exploring the wonder of the sea, visitors will be diving into ways that they can help the world’s oceans.

Techniquest CEO Lesley Kirkpatrick said visitors were in for an “unforgettable” new line-up of After Hours events, which have been sponsored once again by Admiral.

Mrs Kirkpatrick said: “We’re delighted to be working alongside Admiral for our brand-new season of After Hours events and are thrilled to be receiving their support once again this year.

“We’re constantly working to make science as accessible and fun for everyone. Our After Hours events aim to do just that, offering a combination of both learning and socialising in a relaxed format. We hope to continue the success of previous After Hours events this coming autumn.”

All After Hours events include full use of the venue’s 130 interactive exhibits and access to a fully licensed bar. Visitors will also be able to grab a bite to eat from Cleverchefs, which will be providing themed street food for each event.

Visitors are encouraged to book early to avoid disappointment as tickets are limited. For full booking information please visit – https://www.techniquest.org/plan-your-visit/after-hours/ 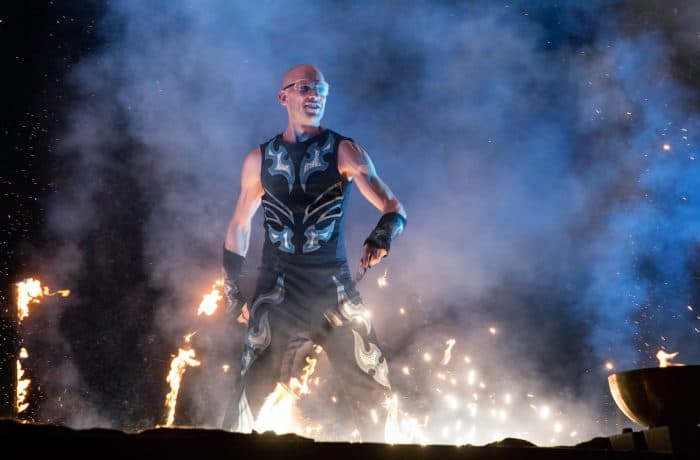 After attracting 43,000 visitors last summer, a line-up of exciting entertainment is preparing to take place over at Barry Island, beginning with the Isle of Fire Weekender on July 21-22.

The Isle of Fire will once again see Barry Island transformed into a blazing spectacle, where the Lantern Parade, Viking Ship and live music will take over the gardens, along with live fire dance shows.

This year’s Isle of Fire will also feature the mesmerising Mechanical Heart, a beating heart with light and music created by blacksmith Felicity Jones.

The following weekend, it will welcome the Cinemor Weekender, a new event in collaboration with BAFTA Cymru.

Joining other film fanatics in this limited capacity event, guests will enjoy the best of Welsh film and television with workshops and screenings of celebrated films such as Tiger Bay, The Edge of Love and Very Annie Mary.

On the final weekend of August, the Cinema by the Sea will be making a return to the gardens with open-air screenings of E.T. The Extra Terrestrial (1982) on August 25, and The Greatest Showman (2017) on August 26 taking place. During the screenings, visitors are free to bring along their own picnics and wind down their summer holiday before the new school term begins.

The final weekend in June will be a foodie favourite, with Beats, Eats and Treats (June 30-July 1) taking over the island, which will boast a prosecco bar, farmer’s market and artisan foods.

Nia Hollins, Principle Marketing and Tourism Officer at Vale of Glamorgan Council, said: “After record success last year, Barry Island is all set for a bumper summer, and the Weekenders really gives our visitors something extra to look forward to.

“While our visitors will still be able to make the most of the beautiful coastal surroundings, and enjoy the beach huts and activities, this will add a little bit of excitement to their visit!

“We can’t wait to see people share their photos and videos with us on Twitter and Facebook during the Weekenders, it’s great to see people enjoying themselves.”

For more information on the Barry Island Weekenders and other events over the summer, please visit visitthevale.com