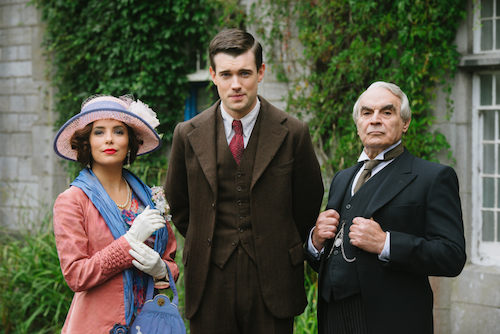 Wales’s flourishing film industry will once again be on display this week when an all-star adaptation of Decline and Fall hits our screens.

The TV mini series adapted from the 1928 novel, which also stars actor David Suchet, Tim Pigott-Smith and Nickolas Grace, is being brought to screens thanks to Fortitude producer Matthew Bird and writer James Wood.

And, in a further sign of confidence in the Welsh film and TV industry, the highly anticipated production was partly filmed just 20 minutes outside Cardiff.

This is thanks to the success of its Ffilm Factory 35, which has hosted TV shows including Dr Who, American historical drama Will, and film thriller The Chamber.

The 30,000sq ft facility boasts easy access to the M4, on-site security 24 hours seven days a week, access via four loading bays, a variety of on-site services including a canteen for catering, space to house unit base and crew parking, a cinema room for screening, and on-site post-production facilities.

Sony UK TEC director of professional services Gerald Kelly said it was “thrilling” for the Pencoed site to consistently be chosen among filming locations for some of the biggest shows of the moment.

He said: “Since launching the Ffilm Factory in 2015 we have been blown away with the incredible response from the British and Welsh film industry.

“The facility has proved to be a huge success and we have been delighted to welcome some of the biggest productions of the moment to Pencoed.

“We were extremely excited to host the cast and crew of Decline and Fall, which we all look forward to watching from this week.

“We have also recently welcomed two more huge productions filming at Pencoed –  Dr Who and Will – which truly demonstrates the versatility the Ffilm Factory can offer.

“I feel that the continued interest not just in our Ffilm Factory, but for filming in Wales, is an encouraging sign for the industry and we are thrilled to be a part of its success.”

Decline and Fall will appear on BBC One from 9pm on Friday.