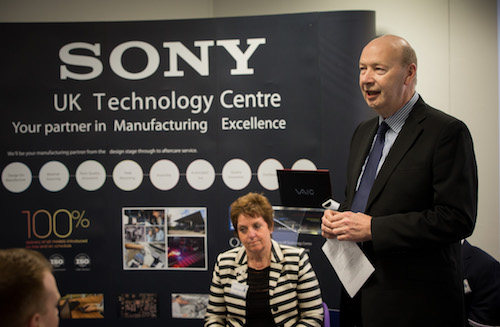 Dedicated Sony UK Technology Centre staff who have worked a combined total of over 1,000 years have been recognised at a prestigious awards night.

Fifty-seven members of the Pencoed facility’s team have been honoured at Sony UK TEC’s annual Long Service Awards’ event thanks to their continuous devotion.

The awards night, held at Pencoed House, in Pentrych, recognised staff who have reached significant career milestones of between five and 35 years.

On the night staff were treated to a three-course meal and casino-themed entertainment along with a live performance from the Ipop band.

They were then congratulated by managing director Steve Dalton OBE who praised their continuous innovative thinking and hard work.

He said: “This year’s award-winning staff have devoted a combined total of 1,095 years’ of service to Sony UK TEC – which I’m sure anyone would agree is admirable.

“Their dedication to the company and endless hard work have helped to shape the facility into the award-winning business it is, and for that we can’t thank them enough.

“The fact that we have three members of staff who have dedicated 35 years each to the facility, and many others who have worked here for decades, demonstrates how invested we are in the growth and progression of our staff.

“I would like to congratulate them again on behalf of the company for reaching these impressive milestones.”

Director of professional services Gerald Kelly was among those to be recognised for 35 years’ service, while John Edwards, who works as a [insert role], and [insert role] Christopher Thomas also reached the impressive milestone.

On his achievement, Mr Kelly said: “Working at Sony UK TEC for the past 35 years has been a truly unique career opportunity, allowing me to grow with the business as it has become one of the most progressive facilities in Wales.

“Having started at the Bridgend site in 1981 it has been a privilege to work with so many talented staff members across a number of departments, allowing me to really expand my skillset.

“I would like to thank Steve and everyone at Sony UK TEC for this recognition, which means a great deal to me.”

Sony UK Technology Centre employs over 500 highly skilled team players, who help to create some of the most advanced technology on the global market. Alongside producing the 4k cameras- the latest in broadcast technology – its world-class engineers also work across third-party collaborative manufacturing on products including the Raspberry Pi and Telensa. They also work to pioneer the latest ground-breaking manufacturing processes of the future, through the Advanced Manufacturing Research Operations Centre.