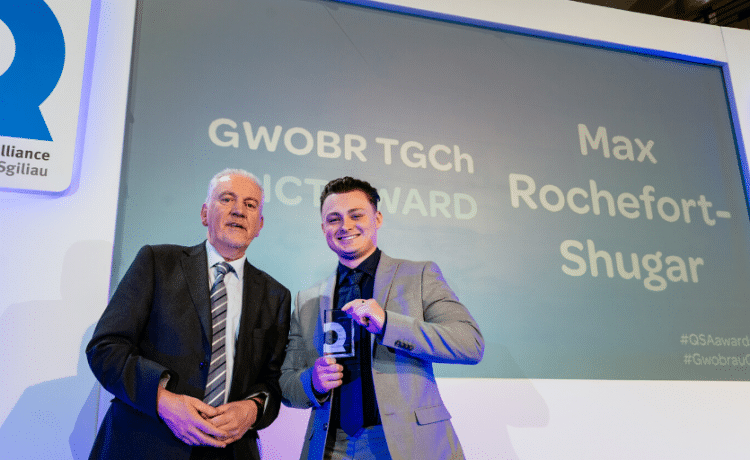 Max Shugar, a software and electronic engineering apprentice at the Pencoed facility, has won the IT Award at the 2020 QSA Apprenticeship Awards.

The 23-year-old was presented with the award at Cardiff and Vale College’s City Centre Campus on March the 11th in front of 200 guests, including Wales’ political, educational and business elite.

The QSA awards, from Cardiff and Vale College, aim to celebrate the success of standout apprentices who have excelled over the past year.

Mr Shugar, who is in the fourth year of his apprenticeship in conjunction with Cardiff and Vale College, was recognised after proving himself to be an integral part of Sony UK TEC.

As part of his role at the facility, he manages the development of Sony UK TEC’s Industry 4.0 asset management system, designs web-based dashboards and tools for production, and writes device drivers and middleware for connecting Internet of Things (IoT) smart devices to databases.

Thanks to his dedication to Sony UK TEC, this is the third award Mr Shugar has been nominated for over the past year, having also won the Engineering Apprentice: Rising Star Award at the Make UK Wales Awards last year.

On his success, Mr Shugar said he was “thrilled” and “privileged” to have won.

He said: “I am immensely pleased to have won this award and I’d like to thank everyone at Cardiff and Vale College and Sony UK TEC who have supported me.

“To have been recognised as a stand-out apprentice means a great deal to me, as I feel my apprenticeship has really enabled me to develop and hone my skills, while pursuing a career that I am passionate about.

“It is a privilege to be both studying engineering and learning vast amounts, but also to be applying that while working at one of the leading manufacturing facilities in the world.

“Sony UK TEC has been incredibly supportive of my studies and constantly encouraged me to keep striving for excellence, so I’d like to say a particular thank you to them.

“To win this award is thrilling, but to have been recognised across all three awards over the past year has been really overwhelming in the best possible way.

“I’m fortunate enough to be working in a field that I love, so to receive recognition for that is incredibly rewarding.”

On his latest win, Mr Bibey said: “Max is so professional, knowledgeable, and courteous, and his successes throughout this year come as no surprise.

“Not only has he completed his college course in record time, he is now working towards a BSc in Applied Software Engineering, all while balancing a demanding work schedule.

“His unwavering dedication and limitless innovative thinking have transformed the department and we are extremely proud of him.”

Jessica Jones, who manages Sony UK TEC’s on-site Learning and Development Academy, added: “Max is an absolute star! He was the first apprentice to go through our Software and Electronics Apprenticeship, and he has truly shaped it for those that come after him.

“It’s incredible to see the individuals who join us on our Apprenticeship scheme being acknowledged for the hard work they put in on a daily basis.

“We’re very proud of Max for his achievements over the year and look forward to witnessing his future successes.”