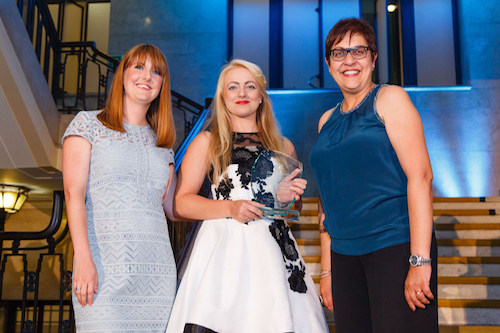 A Sony UK Technology Centre engineer, pioneering industry-leading research, has been recognised among the most influential women in the UK-wide sector.

Jessica Leigh Jones was named among the Telegraph’s Top 50 Women in Engineering thanks to her innovative work at the progressive Pencoed facility.

The Newport resident, who works at Sony UK TEC’s Advanced Manufacturing Research and Operations Centre (AMROC), was recognised at an event at London’s Banking Hall.

The Telegraph initiative, supported by the Women’s Engineering Society, aims to promote the uptake of the engineering profession among women and celebrate those who have made a contribution to the Science, Technology, Engineering, and Maths (STEM) sector.

On her recognition, engineer Ms Leigh Jones said: “I am honoured to be recognised among these inspirational women who are leading the way in the UK’s engineering sector, and paving the way for generations of women to come.

“This initiative promotes the rich contribution of women in STEM, and I hope to use this as a platform to demonstrate the variety of opportunities available to young people in engineering.”

Ms Leigh Jones was inspired to pursue her love of engineering thanks to her father, who worked as an aircraft electrician at Ministry of Defence St Athan.

After studying a degree in Astrophysics, she followed her passion for engineering, which led her to the award-winning Welsh facility renowned for its innovative projects. These include the AMROC initiative, manufacturing the latest 4K broadcast and professional cameras, and carrying out third party collaborative manufacturing for brands including Raspberry Pi.

Having been raised in an engineering-focussed family, gender stereotyping in the sector was never a consideration for Ms Leigh Jones. However, she feels that educating people on their career opportunities could narrow the gender gap.

She said: “Currently just nine per cent of engineers and only one per cent of electricians are female. This is very low, although I do not personally think that the percentage matters.

“What is important is that all people, regardless of gender, ethnicity or background, are given the opportunity to pursue careers in engineering if they want to.  There is undoubtedly conscious and unconscious bias that still exists that prevents this from happening, but the way to tackle this is through informing and educating.”

Ms Leigh Jones also felt the support of her Sony UK TEC colleagues, along with the unparalleled skillset she has acquired in producing high-standard manufacturing products for worldwide distribution, contributed to her recognition.

“It is so inspiring to be part of an organisation whose rate of innovation is unparalleled across industry and throughout Wales,” she said.

“It is very rewarding to see technologies that we have developed at Pencoed being used globally throughout the brand. Sony is a dynamic organisation with innovation hard-coded into their DNA. I am unduly grateful for the opportunities I have received since joining.

“I was very fortunate to be supported throughout the nomination and awards process, and would like to extend my thanks to Kevin Edwards, Gerald Kelly and Naomi Climer for their support.

“I would like to thank Alton Convent School, Hampshire for my nomination. I am a Patron of Science & Engineering at Alton and donate an award to the school for Engineering & Entrepreneurship annually.”