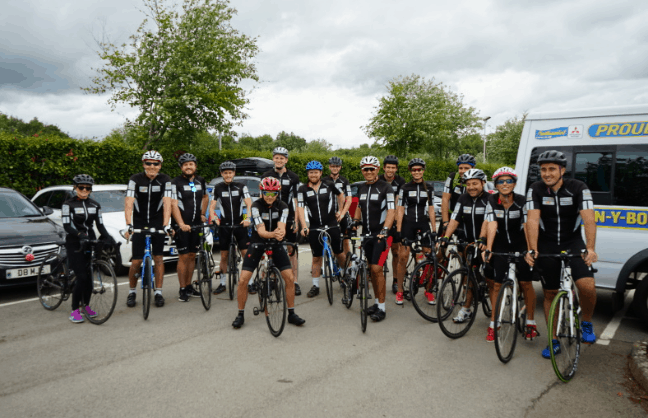 Dedicated cyclists from Sony UK Technology Centre (UK TEC) have taken on an “exhilarating” 300-mile coast-to-coast challenge across Wales to raise thousands for a Bridgend hospital.

Fifteen members of the Pencoed factory’s Team Xtreme jumped on their bikes for the epic three-day adventure last weekend in a bid to support the vital work of the Princess of Wales Hospital’s children’s ward.

This is the second time that the team, which was formed 15 years ago, has undertaken a challenge of this magnitude in aid of the hospital.

This year’s challengers began pedalling from the specialist manufacturing facility on August 25th completing their 312-mile round trip in just three days.

Over the three days they cycled 12 hours every day fighting adverse weather and fatigue, raising £5,500 for the children’s ward.

This total will be added to more than £60,000 which Sony UK TEC has already raised for the hospital since it was selected as their chosen charity six years ago.

Team member Jonathan Williams said they were incredibly proud to have completed this “once in a lifetime” challenge and raised so much money for a fantastic cause.

Jonathan said: “When we were planning the second annual challenge this year we wanted to choose something even more extreme than 2017 – and this was certainly that!

“We wanted our challenge to reflect just how much the children’s ward means to our staff and to thousands of people across south Wales, so a coastal pedal felt like an exciting choice.

“Over the course of the three days our team was absolutely amazing, and everyone really pulled together to show their support and ensure we could all complete each stage.

“Despite the distance being initially daunting this really was an exhilarating once in a lifetime experience that I’m sure no-one would change.

“We are absolutely delighted to have raised so much for such a vitally important cause and we can’t wait to see how the funds are put to good use.

“We’d like to thank everyone for their fantastic support and we look forward to the 2019 event!”

Gerald Kelly, director at Sony UK TEC, said: “At Sony, the spirit of doing everything we do “For the Next Generation” goes all the way back to the vision of Sony co-founder Masaru Ibuka, and it still guides Sony’s community engagement everywhere we do business. In Wales, our team supports a variety of charitable causes each year including educational projects, healthcare charities and sports clubs among others.

“As part of our commitment, we select one organisation as our annual adopted charity that our main funding efforts are geared towards. For the last six years, this has been The Children’s Ward at Princess of Wales Hospital in Bridgend.

“Our support has resulted in the completion of various projects and the purchase of much needed equipment for the hospital. This year we’d like to give you, the people whom we work with and who are an integral part of our operation, the chance to be a part of this amazing experience and together, help us make a real difference to people’s lives.”

So far, thanks to the generosity of the 600 strong team at Sony UK TEC, over £60,000 has been raised for the Princess of Wales Hospital with the facility also taking part in three charity football games, cake sales and individual fundraising campaigns.

The team has also held numerous charity golf days across Welsh courses with a special 25th anniversary event set to be held at the Celtic Manor in October.