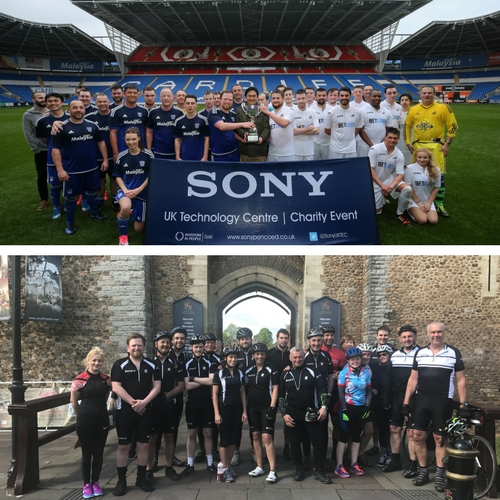 Staff from a leading Pencoed factory have taken on a gruelling 300-mile cycle to raise thousands of pounds for children battling illness.

Thirteen members of staff from Sony UK Technology Centre have jumped on their bikes to undertake a Wales-wide cycle challenge.

Starting from Caernarfon, the cyclists, along with two support staff, travelled 100 miles a day for three days stopping off at castles including Conway; Powis; Caldicott; Caerleon Amphitheatre; Newport; and Cardiff along the way.

The last 30 miles of the journey from the capital to Ogmore saw the team joined by 30 additional staff, including former rugby player and Sony UK TEC Learning and Development Ambassador Richard Parks, as they headed into the final leg.

Thanks to their efforts over £4,000 was raised for The Children’s Ward at Princess of Wales Hospital. The funds add to almost £40,000 raised by Sony UK TEC for the vital facility over the past five years.

Director of professional services Gerald Kelly said: “Our staff have always gone above and beyond to support the fantastic work of the Children’s Ward over the years.

“This latest challenge clearly demonstrates their passion and dedication to supporting the cause, and as ever, they pushed themselves to the limits to raise an impressive sum of money. Over three days they cycled an amazing 300 miles and everyone at Sony UK TEC congratulates them on completing this incredible challenge.”

Alongside the cycle challenge, the Sony UK TEC team also raised funds for the Children’s Ward this month through an intercompany charity football Cardiff Vs Swansea football match.

The second annual game, which took place at Cardiff City Stadium, saw both teams go head to head in a 90 minute clash which finished in a nine all draw.

Both players and spectators helped raise £1,644 through the event, which was followed by a prizegiving and raffle.

The Pencoed manufacturing facility, which produces thousands of HD broadcast and professional camera systems including the latest 4k models each year, has worked successfully with Cardiff City FC over the past seven years.

It recently provided three new state-of-the-art games consoles for the stadium’s family zone, which were unveiled ahead of the Bluebirds game against Ipswich.

Mr Kelly added: “We’d like to congratulate all the Sony UK TEC players who took part in this highly entertaining game to raise even more funds for the Children’s ward.

“We truly hope that the almost £6,000 raised through both these events helps to support the admirable work carried out at the children’s ward.”