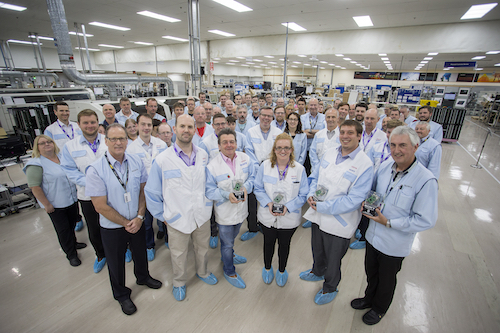 In the last five years, the Pencoed-based facility, has seen staff numbers leap by 200 taking its team of local employees to 540.

The growth in staff numbers, which has been a huge boost to the local economy, has coincided with a production milestone at the award-winning factory, with Sony UK TEC manufacturing the best-selling British computer of all time.

This week the facility has celebrated reaching the 10 million Raspberry Pi manufacturing milestone after only five years.

Sony UK TEC has played an instrumental role in the journey of the Raspberry Pi, the third best-selling general purpose computer of all time globally.

Raspberry Pi was originally manufactured in China, but founder Eben Upton moved production to Sony UK TEC in 2012 due to the facilities’ capacity and innovative automated processes.

The facility was first approached to make 10,000 of the low-cost, credit card-sized computers annually.  However demand quickly soared and Sony UK TEC went onto produce one million in its first year.

“Our growth has been intrinsically linked to the success of the Raspberry Pi and we are delighted to reach the 10m manufacturing milestone. This is a significant achievement for everyone involved in its production, especially our devoted Sony Team, the Raspberry Pi Foundation, and distributors Premier Farnell.

“It is also a significant achievement for the Welsh manufacturing sector to have an internationally successful, high volume, low-cost electronic product manufactured right here in Wales.

“This technology and growth has challenged our highly skilled team of engineers and technicians to develop new processes and drive innovation through the spirit of continuous improvement.

“In addition we were able to support the Pi Foundation further by introducing Pi manufacturing to our Japan counterparts and there is now a ‘made in Japan’ version of Pi.

“We look forward to continuing this successful partnership, reaching the next significant milestone and creating even more of these revolutionary computers.”

Mr Dalton  OBE was joined at a celebration event at Sony UK TEC by his senior staff and manufacturing team, along with Raspberry Pi Foundation founders Eben Upton and Pete Lomas; and distribution partners RS Components and Premier Farnell.

Founder Mr Upton said: “The last five years has been extremely exciting for us as we watched the Raspberry Pi become Britain’s best-selling computer of all time.

“When we initially began manufacturing it here at Sony UK TEC we could never have imagined it would be the soaring success it has become – and for that we are entirely grateful to Sony and our distribution partners.

“We are particularly delighted that the Pi has set the benchmark for utilizing innovative and progressive manufacturing right here in the UK, as it was always our wish to make the computers in this country.

“Thanks to Sony UK TEC’s unparalleled manufacturing standards, comprising the latest techniques and the very best in engineering talent, we were able to create a product which has become a global best seller – with 14million sold, two thirds of which has been built in South Wales.”

Sony UK TEC produces thousands of HD broadcast and professional camera systems and is the only manufacturing facility outside Japan to manufacture the latest 4k broadcast technology. It also has a host of lucrative third-party manufacturing contracts smart street lighting system Telensa.