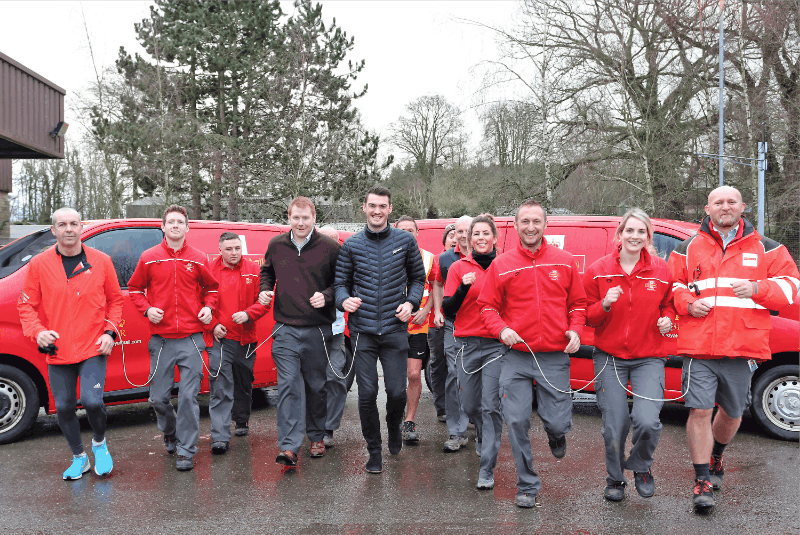 Thirty daring runners from the Royal Mail are preparing to take on a marathon world record challenge in Pembrokeshire in aid of a “sport-loving and happy go lucky” colleague.

Staff from depots in Brecon, Llandrindod Wells and the surrounding areas, including 15 postmen and women – some of whom have never attempted a 10k run – will be bravely attempting to break the Guinness World Record at The Wales Marathon in aid of Cancer Research Wales.

During the 26.2-mile event at the Pembrokeshire Coast National Park, the runners will be attempting to break the Guinness World Record for the largest number of people to complete a marathon while linked together.

The highly unique challenge is being attempted in support of Royal Mail manager, friend and co-worker Phillip ‘Pip’ Morgan, who was recently diagnosed with cancer of the stomach.

Mr Morgan, affectionately known as Pip, is a keen cyclist who is “loved by everyone” and “makes friends wherever he goes”. Following his diagnosis, his colleagues were left so devastated that they decided to take action and were spurred on by their sport-loving friend.

Led by Mr Morgan’s colleague of over 10 years Neal Gardner, who previously broke the same world record in 2009 at the London Marathon, when 30 runners were tied together, the team is now aiming to beat the current record set in 2017 at 112 people.

With 25 Royal Mail staff and 65 extra recruits in the team so far, at least 30 more people are needed to join them to break the record and raise money for Wales’ leading cancer charity.

Delivery Office Manager Mr Gardner said: “We’ve been blown away with the response to this challenge with more people signing up to take part all the time.

“Some of these people have never even run a 10k but they’ve been inspired to take part because of Pip and the great work that Cancer Research Wales do.

“I’ve worked with Pip for over 10 years and he’s bonkers, he’s so happy go lucky and he wouldn’t think twice about jumping on a bike and cycling 120 miles. That’s just him. He’s always been incredibly supportive of me with my job and this is my way of thanking him and showing our support during a really challenging time.

“Around 40 to 50 people taking part know and love Pip and will be taking part and showing their support for this lovely man. Everyone else in the team has been affected by, or had loved ones affected by cancer in some way too, so this is a really personal cause which is close to them.

“We hope to raise as much as we can for Cancer Research Wales and to show Pip just how much he means to everyone.”

With the aim of raising around £70,000 for Cancer Research Wales, 33-year-old Mr Gardner has secured 120 places in the race, with 30 yet to be filled. He is now calling on any keen runners, or those who simply want to take part, to get in touch and sign up.

He said: “This will be an unforgettable event for an absolutely fantastic cause, so we’d urge anyone who wants to join us on the day to get in touch. It really will be a once in a lifetime event so please sign up.”

All participants will be raising vital funds for Cancer Research Wales, which is dedicated to the pursuit of a cure for cancer by making vital progress into prevention, early diagnosis and better treatment.

“The money they raise will make such a huge difference to the lives of thousands of people diagnosed with cancer across Wales annually, and we truly can’t thank them enough.

“As a charity we are reliant on the generosity of our fantastic supporters in order to fund life-saving research into the prevention, diagnosis, and treatment of cancer. So it’s thanks to our amazing supporters that we are able to continue making a difference.

“I will be joining them for the World record attempt, and I look forward to crossing the finish line by their side. Everyone associated with Cancer Research Wales wishes them the very best, and  would like to thank them for helping us fight for a Wales without cancer.”

To take part in the event email neal.gardner@royalmail.com or call 07841787682. For further details visit www.cancerresearchwales.co.uk/crw_events/walesmarathon/