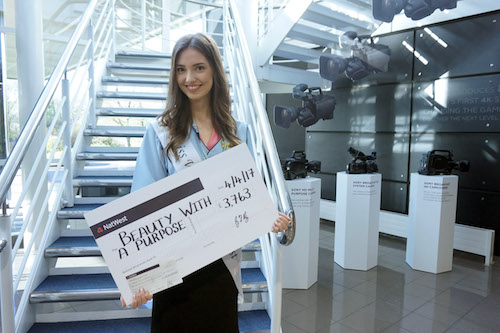 A Pencoed woman who is competing to become the next Miss Wales has raised over £3,500 for disadvantaged children.

Hannah Williams is among 32 women hoping to secure the crown at this year’s prestigious competition.

During her campaign the 23 year old has so far hosted charity nights, fundraised in her workplace at Sony UK Technology Centre, participated in the 5k Gung Ho, and held an auction and raffle to raise the £3763. Family, friends and staff at the Pencoed manufacturing facility which produces thousands of HD broadcast systems and 4k cameras have supported this.

All funds this year are being donated to the pageant’s chosen charity Beauty With A Purpose, which supports children’s charities within Wales and around the world.

Hannah, who is an Assistant Sourcing Manager at the specialist facility in Pencoed, has also been raising awareness of the importance of more women exploring manufacturing professions and Science, Technology, Engineering and Maths careers throughout her campaign.

And with the new Miss Wales set to be crowned at a three-day ceremony in Cardiff this week, Miss Williams reflects on her “fulfilling” journey ahead of the event.

She said: “Being part of this year’s Miss Wales competition has been the most rewarding experience for me.

“Having the opportunity to meet so many inspirational and supportive people as part of my campaign has been amazing.

“However, being able to raise money to support disadvantaged children in Wales and around the world is what it is really all about.

“I am incredibly humbled by the generosity people have shown through my various fundraising events, which has enabled me to raise this sum. I’d like to take the opportunity to thank everyone once again. It has really meant the world to me.

“Money raised will go directly towards life-changing charities making a difference to the lives of disadvantaged children.”