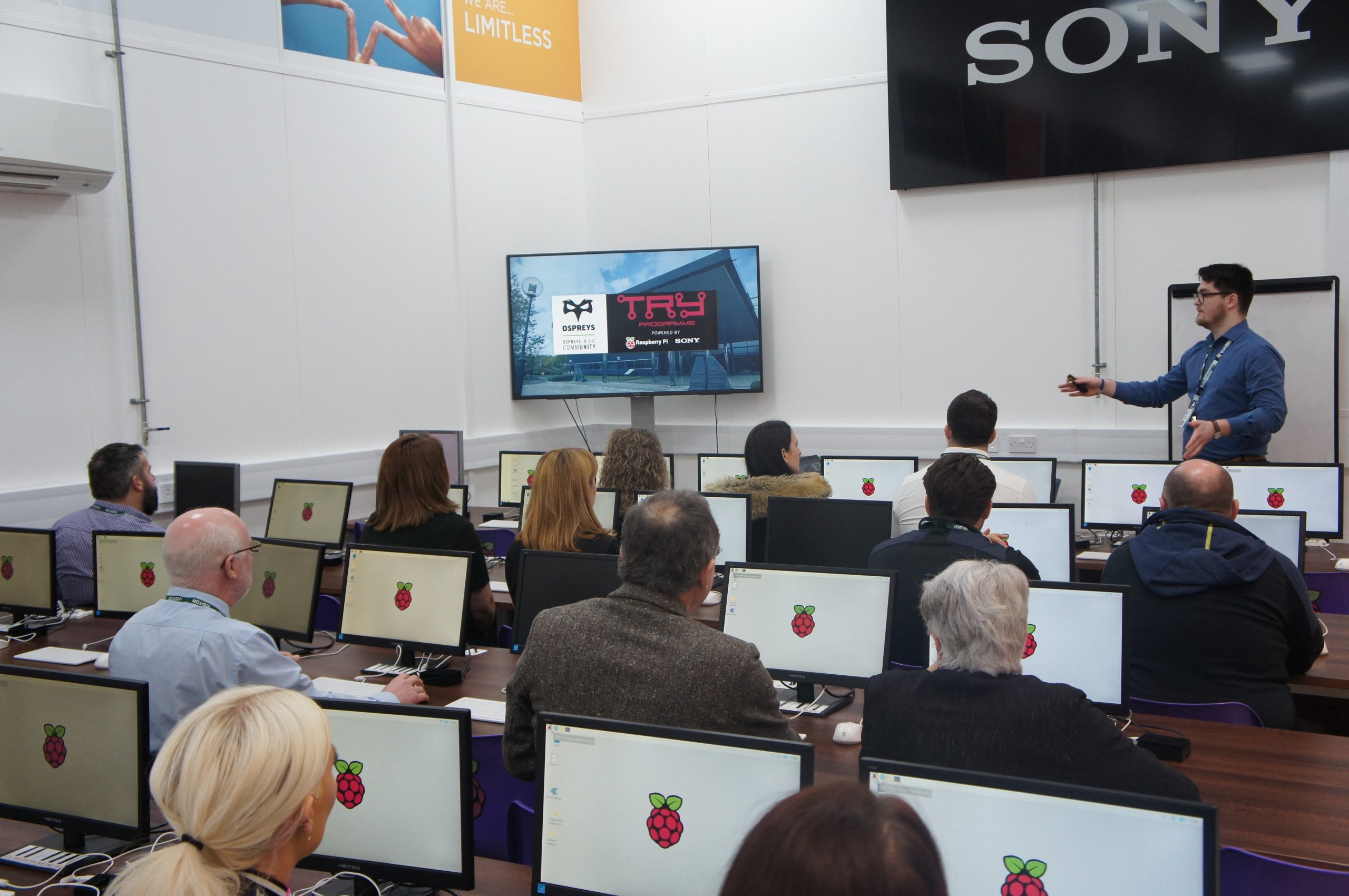 The team’s Ospreys in the Community arm has launched the educational Try Pi initiative with the Pencoed-based manufacturer, encouraging pupils across South Wales to become more digitally literate.

The collaborative initiative was launched at the award-winning manufacturer’s facility, after a successful pilot of the programme, with members of Ospreys in the Community, Sony UK TEC, Warburtons, Swansea Council education, Bridgend AYPD, Cefn Cribwr Primary, Welsh Netball, and ERW all attending.

As part of the launch, they got the opportunity to experience the new, specially-tailored coding workshop using the Raspberry Pi, which is manufactured at Sony UK TEC. The workshop involves students creating an interactive rugby game through coding, making the game easier or harder and editing it as they desire.

During the day the guests also got the chance to tour the factory, which manufactures both Sony and third-party technology including internationally renowned 4K broadcast technology, smart office solution Nimway, and smart city technology.

On the successful launch of the Try Pi programme, Tom Sloane, Community Foundation Manager for Ospreys in the Community, said they were “thrilled to be involved” in such a progressive initiative.

Mr Sloane said: “It’s fantastic to be able to launch this exciting new programme for Ospreys in the Community.

“As a foundation, we’re all about promoting the #MoreThanRugby element to engage with the wider community and this programme really highlights that whilst making a difference to primary school children.

“We’ve had lots of positive feedback from the schools that took part in the pilot programme, and the great thing about this whole project is that the children are behind creating it, making it better and helping it to constantly evolve.

“It’s great that our long-standing relationship with Sony continues with Warburtons joining again to deliver their school modules, a great programme delivered by three giant brands”

The number of pupils learning coding at the facility soared to over 4,000 within last year, with a record 202 pupils recently taking part in the programmes in just one week. It has also seen the number of schools visiting the site increase, welcoming 149 schools last year, which was up by 33% on the previous year.

Thanks to its focus on ensuring visits are of a high quality, the factory was also awarded a Gold Award at the Valued Partner Awards for its partnership with a local comprehensive.

On the success of the Ospreys’ partnership and the launch of Try Pi, Gerald Kelly, Director of Professional Services, said he was excited to see how the new initiative will inspire a new generation of STEM leaders.

He said: “We are delighted to be continuing our partnership with Ospreys in the Community and teaming up on this engaging project to teach young people essential coding skills.

“The new Try Pi programme is truly a unique insight into the exciting career and innovative educational opportunities that exist for young people through coding, so we are delighted that this has been incorporated into our ongoing work with them.”