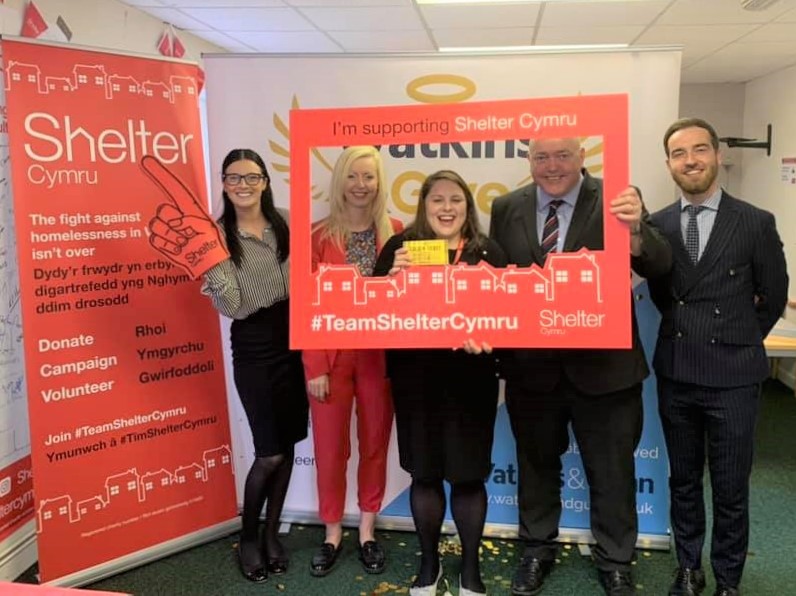 Award winning South Wales law firm, Watkins & Gunn, has been giving back to the local community by donating over £45,000 to 12 different local charities.

Through ‘Watkins & Give’, the firm’s Corporate Social Responsibility (CSR) arm, it has so far surprised 10 charities with a mystery donation. There are 2 further mystery donations to go over the coming weeks as part of its ’12 days of Giving’ initiative.

Staff at the firm have been visiting the charities over the past month taking balloons filled with confetti and a golden ticket to reveal the mystery donation amount.

Natalie Corten, the solicitor at Watkins & Gunn who is championing the charity donations, said:

“We wanted a different and fun way of making the donations, instead of just handing over the standard large sized cheque.

“We came up with the idea of going to each of the charities with an extra-large confetti filled balloon containing a surprise golden ticket (think Willy Wonka!) with the amount of the donation written on it

“As there are 12 charities in total, we have named the project ’12 days of Giving’

“We asked those of our staff with a particular affiliation to the charity concerned to go along to the presentation. We then asked someone from the charity to pop the balloon and read the amount written on the golden ticket to reveal the size of the donation.”

“We chose not to disclose the amount of the donation in advance so that we can capture the moment of surprise!

“This is my first ‘project’ for the firm, and it has been one that I have thoroughly enjoyed. As they say, it is “always nice to be nice”!

Through its ‘Watkins & Give’ initiative, the firm is committed to supporting the local community by fundraising, volunteering, attending charity events and giving pro bono legal advice.