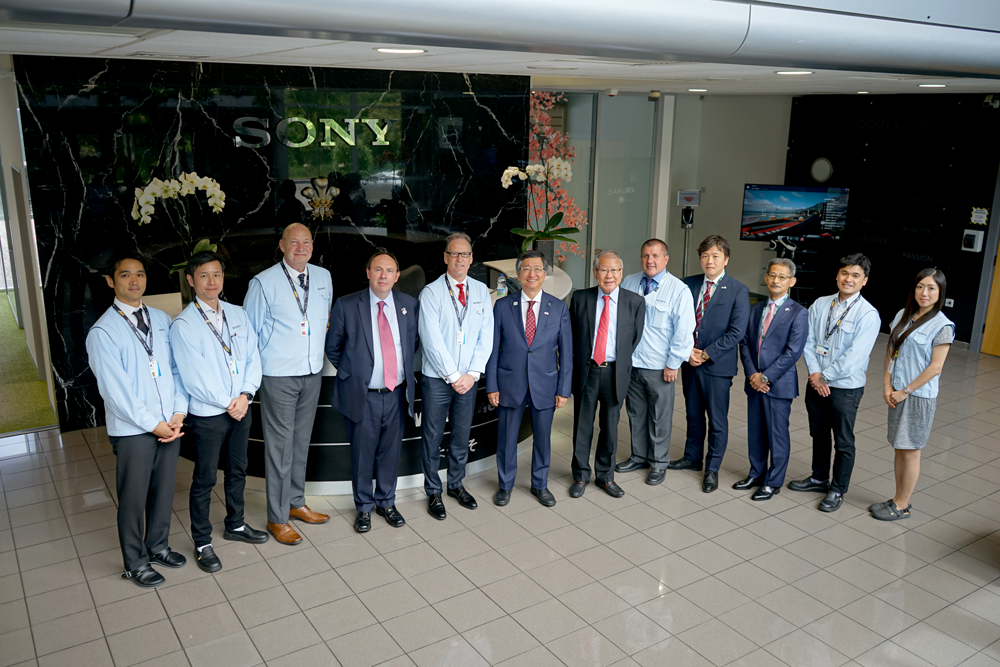 Japanese Ambassador to the UK, Koji Tsuruoka, joined Sony UK TEC in celebrating the Japan – UK Season of Culture this week, marking his first visit to the facility.

The purpose of the visit to Wales was to attend the reception being held by Welsh Government in celebration of the long-standing links and shared history between Wales and Japan. Following his time at Sony UK TEC, the Ambassador also paid a visit to Tri-Wall in Monmouth, before attending a reception at the National Botanic Garden of Wales.

These Welsh events are part of a wider global cultural exchange planned between the two nations in 2019/20, which will see Japan host the Rugby World Cup this year and the Tokyo Olympic and Paralympic Games in 2020.

During his visit to Sony, the Ambassador was involved in a complete tour of the facility, accompanied by the senior management team. There were presentations from all areas of the business, with departmental overviews including a factory tour where the Ambassador and his guests were able to watch the manufacturing process of numerous products.

His visit to Sony UK TEC also coincided with a Japanese-themed school visit which saw the children take part in calligraphy, origami, and language workshops. Ambassador Tsuruoka joined the children of Penyfai Primary and Ysgol Plasmawr for this interactive session demonstrating Sony UK TEC’s focus on educating the next generation.

The Ambassador has a history of supporting Wales and celebrating its links with Japan. He has previously visited the National Museum of Wales to see its Japan Exhibition and has chosen to visit Sony during his latest visit due its leading position as a Japanese company contributing to the Wales economy.

Gerald Kelly, Director of Professional Services, said: “As an organisation which takes pride in its global links with Japan, we are thrilled to welcome the Ambassador and his guests.

“Japan’s rich culture and ethos is highly influential in the way that we operate as a manufacturing facility here in Pencoed, and we believe that by adopting its innovative and progressive vision we have achieved greater global success.

“Ultimately, we believe that the values entrenched in Japan’s technology, arts, and culture could be significantly beneficial to us here in the UK, and we are delighted to be playing a role in strengthening these links.”