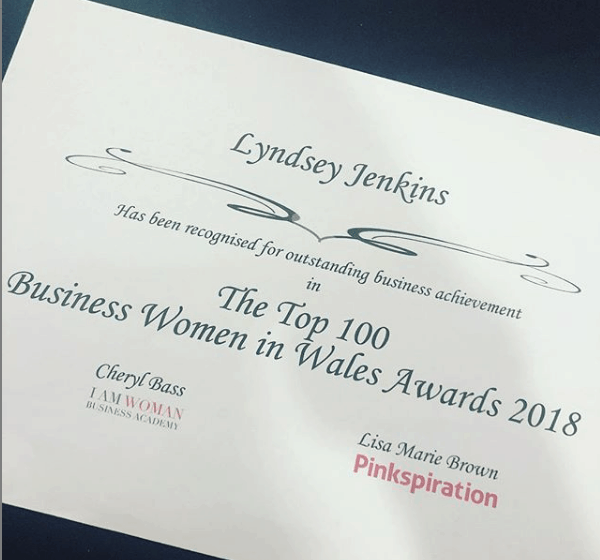 The managing director of award-winning creative communications agency jamjar is “beyond delighted” to have been named among the Top 100 Business Women in Wales.

Lyndsey Jenkins, the founder of the Cowbridge-based agency, was included in the prestigious annual list, which celebrates the invaluable impact and contribution of Welsh women in business.

Ms Jenkins, who founded jamjar in 2012, was nominated following the agency’s unprecedented success over the past year, which has seen its innovative work recognised with four awards from the CIPR Cymru, and a coveted national CIPR Excellence Award.

Over the past year the agency has also expanded and diversified its brand beyond traditional PR services by incorporating in-house design and videography, which culminated in a major rebrand of the agency earlier this year.

Ms Jenkins, who joined her fellow leading businesswomen at a glitzy event at the Mercure Hotel in Cardiff on Tuesday night, said it was a privilege to be recognised alongside some of Wales’s most inspiring business talents.

She said: “I am beyond delighted to have been recognised among the Top 100 Business Women in Wales this year. The calibre of those nominated was particularly high, so to have been named alongside them is incredibly humbling.

“I am extremely proud with the success jamjar has achieved over the past year, following our rebranding and service expansion, so to be included in this year’s list is particularly rewarding.

“This recognition is also a testament to the innovative and creative work we consistently aim to create for our valued clients, which is driven by the determination and hard work of my team.

“I’d like to congratulate all my fellow nominees on their fantastic successes this year for and being named among the Top 100 Business Women in Wales.”