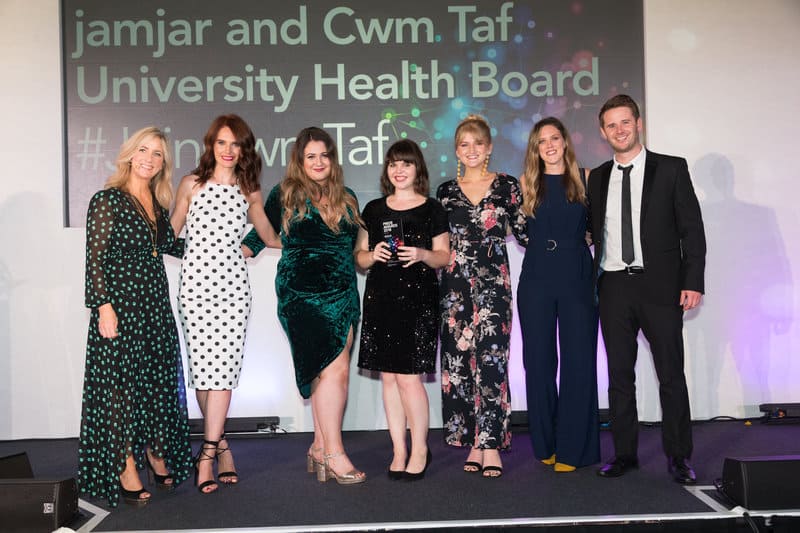 The Cowbridge-based agency, which specialises in PR, digital, social, marketing and creative, took home the most gold awards on the evening triumphing once again.

Held at Cardiff’s City Hall and attended by 300 PR professionals, jamjar was recognised by its industry body for its work with Cwm Taf University Health Board and Visit the Vale.

For the second year in a row, jamjar triumphed in the Best Use of Digital and Healthcare Campaign categories for its notable work with Cwm Taf University Health Board.

The multi-award winning recruitment campaign, #joincwmtaf, targeted doctors from the UK and overseas through a range of innovative digital tactics such as 360 degree video.

The latest win come after a string of successes for the campaign, after it scooped a coveted CIPR Excellence award in June, fighting off stiff competition from industry leaders across the UK such as Facebook.

CIPR judges praised the innovative campaign, commenting that: “This campaign clearly demonstrated a focus on target audience. The creative and emotive approach used to reach the campaign demographic secured a high return on investment, surpassing the original goals, and has set out a framework for future recruitment drives.”

The team also snagged a gold award in the Low Budget Campaign category for its cost-effective communications campaign for Visit the Vale, which helped to attract visitors to its summer event series – the Barry Island Weekenders.

Over the past six years jamjar has claimed over 20 prestigious awards from the CIPR, Chartered Institute of Marketing (CIM) and the Welsh Business Awards.

Lyndsey Jenkins, managing director of jamjar, said: “We’re particularly proud of the work we’ve done for our clients over the last year, and to be celebrated for our creative and results-driven approach is incredibly pleasing.

“The latest wins for jamjar are a testament to the hard work and dedication of my talented team, and we’re all delighted to be recognised by our industry peers once again.”

Rhian Moore, Chair of CIPR Cymru Wales, commented: “We know we have a huge number of talented communicators in Wales. The results we have seen at this year’s PRide Awards show the bredth of skill, professionalism and talent through a number of industries. The campaigns and examples of work showcased in the awards prove the value PR and compelling communications bring to businesses, our economy and society. Very well done to everyone who made the shortlist and massive congratulations to all our winners.”