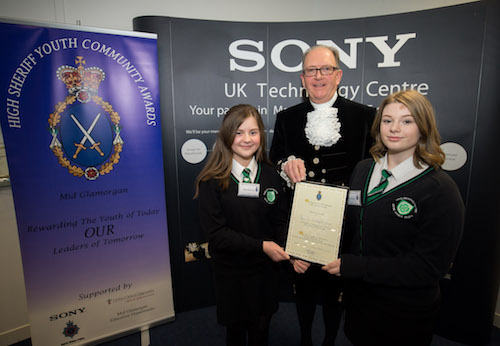 Deserving youngsters who have devoted themselves to communities across Mid Glamorgan have been awarded over £3,000 at a prestigious annual event.

Individuals and groups, who have transformed the lives of those in need over the past year, were recognised at the High Sheriff Mid Glamorgan Youth Community Awards in Bridgend.

The ceremony, which took place at Sony UK Technology Centre visitor centre, saw a record £3, 300 CHECK handed out to groups including the Youth Citizenship Panel and the Eisteddfod Group Pen y Dre.

However, the main winners on the night were Glan Yr Avon Explorer Unit in the group category, and Rebecca Hughes in the individual category.

Both were awarded £1,000 with support from chief sponsors Sony UK TEC.

Director of professional services at Sony UK TEC Gerald Kelly, who is a member of the High Sheriff Mid Glamorgan Youth Community Awards, said he was delighted to recognise these “inspirational” youngsters.

He said: “As a community-focussed business, we at Sony UK TEC feel it is vital to support those who are making a significant contribution to south Wales.

“These amazing groups and individuals have exceeded all expectations to support their communities and we are delighted to highlight their fantastic achievements.

“Innovation and growth is at the heart of everything we stand for, so we firmly support the inspirational work carried out by all our nominees at this year’s awards.”

Glan Yr Avon Explorer Unit was chosen after supporting a wide range of community and scouting events, with members gaining 18 awards among them.

While Miss Hughes, who is a Year 12 pupil at Mountain Ash Comprehensive, was recognised thanks to her dedication to gymnastics.

As the sole choreographer for the Street Flyers community Club, Rebecca helped raise £1,200 for two dance shows and was awarded Young Volunteer Community Award.  She has danced for the Royal Ballet School, represented Wales in the 800m and cross country teams, and supports her younger sister, who suffer with anxiety, with the aid of dance sessions.

This year’s award scheme was also exceptional in that it saw founder Anne Morgan MBE, who set up the scheme in 2008, hand over the chairmanship to former High Sheriff 2015 Jayne James.

Mrs James said: “As chairman of the High Sheriff Youth Trust committee I am honoured to carry on the vision and commendable work that Anne has achieved for the awards scheme.

“It’s wonderful to see young people rewarded for putting 110 per cent into everything they do for their families and local communities.”