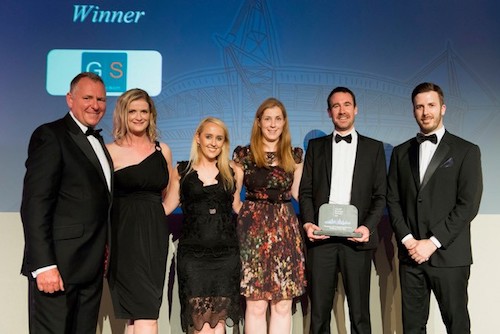 The director of industry-leading business advisory firm Greenaway Scott is “delighted” to celebrate their second award win this year.

Director of the firm Matt Sutton said it was a privilege to be recognised alongside some of Wales’s top companies at the Cardiff Business Awards 2017.

The annual awards, which took place at City Hall, recognise companies and businesses across Wales which have made a significant contribution and enjoyed success over the past 12 months.

Greenaway Scott received the Financial and Professional Services Business of the Year accolade thanks to its significant achievements during this period.

Over the last year the firm, which offers commercially considered legal advice across a range of sector specialisms, has recorded unprecedented growth of almost 100 per cent.

During the year, it acted on a record number of lucrative deals with a combined value in excess of £130 million and expanded its property portfolio moving into a bigger HQ story in Cardiff and establishing a new Swansea office.

It also took the innovative step of adopting an Alternative Business Structure (ABS), allowing it to operate within a multi-disciplinary group structure.

Thanks to this, the firm also scooped a Cardiff Life Awards earlier this year in the Legal and Financial category.

Collecting the award on behalf of the firm, Mr Sutton said: “We are delighted to have been named as the Financial and Professional Services Business of the Year at this year’s Cardiff Business Awards.

“To be recognised among such an inspirational group of professionals is humbling and we would like to congratulate them all on their nominations.

“This award means a great deal to our firm, which has enjoyed a level of growth and success over the past year that we are extremely proud of.

“Our team of talented lawyers has worked exceptionally hard to help us achieve our ambitious aims. Thanks to their determination we have expanded our presence across Wales and the south of England, and acted on a record number of deals.

“I’d like to thank them for their dedication, without which we would not have received this award.”